The tallest buildings in Sri Lanka The tallest buildings and structures in Sri Lanka according to the highest architectural information are as follows. The tallest skyscraper of Sri Lanka- Colombo Lotus Tower is also known as “Nelum Kuluna” in Sinhala. Colombo Lotus Tower is one of the most popular tourist attractions in Colombo, Sri Lanka. At 356 meters, it is the tallest tower in South Asia, the 11th tallest tower in Asia, and the 19th tallest in the world. The tower is 350 m (1,150 ft) tall and covers 30,600 m2 (329,000 sq ft) of floor area. Lotus Tower’s main revenue sources will be tourism and antenna leasing. The Lotus Tower will be used for communication, observation, and other leisure facilities with a construction cost of $ 104.3 million, funded by the EXIM Bank of the People’s Republic of China. The Altair tower, the tallest residential building in Sri Lanka, provides outdoor garden terraces at every level with an innovative two-leg structural design. The building has a 68-floor vertical tower and a 63-floor leaning or sloping tower. At 240m, the building will be one of the tallest buildings in Colombo when it is completed. The building is situated on the banks of the Beira Lake on a 2-acre plot of land leased by the Urban Development Authority of Sri Lanka to the Developer Indocean Developers. Of Altair’s 1.5 million square feet of space, 828,000 square feet or 55 percent is residential space. Of the balance, 36,000 square feet is allocated for retail while 636,000 square feet or 42.5 percent is public space. Located at the heart of the City and bordering the beautiful western coastline of the Indian Ocean, this 47-story RCC framed structure will house the 5-star Hyatt Regency Hotel. The building will contain 2 basements of parking, apartments, a hotel, expansive atriums, an expansive high-ceiling restaurant, banquet rooms, and other recreational facilities. The 475-room Hyatt Regency Hotel will feature 54 Suites, 265 King Rooms, and 150 Twin Rooms covering a total floor area of 1,110,000sqft. An infinity pool with a pool deck will be constructed on the 11th floor. Standing at 229.5m, the building is now the 3rd tallest structure in the country. 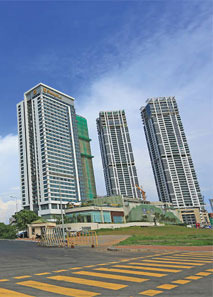 One Galle Face is a mixed-use complex of buildings currently being built near the Galle Face Green in Colombo, Sri Lanka. The facility consists of four skyscrapers, one which will be open for businesses to set up offices, two for the residential component, and the fourth as part of a hotel. The premises in their entirety is owned by Shangri-La. The twin towers of the residential component are tied as the 4th-tallest structures in the country, at 194 m (636 ft). The towers are 51 stories each, with two-, three-, or four-bedroom apartments of 1,733 sq ft (161.0 m2), 2,745 sq ft (255.0 m2), and 3,541 sq ft (329.0 m2), respectively. They will also contain 16 penthouses. Havelock City is the largest residential and commercial development project presently undertaken in Sri Lanka on the largest single cleared site in the Colombo city and is located along Havelock Road. It is developed by Mireka Capital Land a subsidiary of Overseas Realty Ceylon PLC. The project, when fully completed, will boast of 8 luxurious residential apartment towers, a commercial complex comprising an Office Tower offering Grade A workspaces, and a Shopping Mall built to international standards with a fusion of dining and entertainment options including a multiplex cinema. At a cost of US$ 166 million, the 46-story commercial skyscraper will have 600,000 sq ft (56,000 m2) of office space and 200,000 sq ft (19,000 m2) for the shopping mall. Clearpoint Residencies consists of 171 spaciously designed 2, 3, and 4 bedroom apartments, a limited number of penthouses, and Presidential Suites spread over 47 floors. In place of ordinary balconies, all apartments are equipped with large format terraces with Self – Sustaining gardens. As well as preventing the windows from receiving direct sun exposure and providing shade, these large-format terraces will lend themselves as extra entertainment spaces. Colombo City Centre is a 47-story mixed-use development, comprising a five-story 3,675 m2 (39,560 sq ft) retail space, a 164-room hotel, and 192 residential apartments. The building is situated opposite Beira Lake, located at Sir James Pieris Mawatha, Colombo 02. The innovative design of this iconic landmark represents the best of Sri Lanka resonating with the rich cultural heritage of the city. Burega Farnnel, Singapore is the Landscape Architect to the project and ICONCAST is the local Landscape consultant to the project. The lead designer of the project is the globally accredited architecture firm Aedas with their Sri Lankan counterpart KWA. The Kokavil tower, the tallest multi-purpose transmission tower in South East Asia. Around Rs 450 million has been spent on the construction of the 174-meter tower which is situated at Kokavil, the center point between Jaffna and Vavuniya. The tower is to be utilized for television, radio, and telecommunications transmissions as well as military communication operations. Kokavil transmission tower was built in 1982 as a part of grant-aid provided by the Government of Japan. Kokavil area came under the control of Tamil Tigers in 1990. Before this, the Kokavil Tower had been destroyed by the LTTE. After the end of the civil war, the Government of Sri Lanka rebuilt the tower by spending 330 million Sri Lankan Rupees constructing it at a location closer to the original site. Now, the tower provides digital television transmission and Analog television transmission to the northern part of Sri Lanka. The World Trade Center of Colombo, located in the heart of the city, is a center-point of trade and business. As one of the most exclusive business addresses in Sri Lanka, this 152m tall commercial landmark has two 39 story towers connected by the 4 story retail block that they stand over, bringing the total floor count to 43. With over 750,000 square feet of prime office and retail space, state-of-the-art facilities, superb dining, convenient shopping, and spectacular vistas in a “One Stop Shop” concept; the twin structure holds over 120 local, international and multinational brand names that make it one of the most important buildings in Colombo. 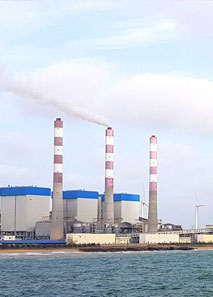 Sri Lanka’s first coal-fired thermal power plant and the largest power station is implemented as a venture of the Ceylon Electricity Board with the aid of EXIM Bank of the Republic of China. Located 100m inland from the shoreline, the construction was undertaken by the CMEC (China Machinery Engineering Corporation) and the total estimated cost of the project was USD 1.35 billion. According to the Ceylon Electricity Board, the US$455 million first phase generates nearly 1.7 TWh of electricity annually — a significant amount when compared to Sri Lanka’s total production of 11.5 TWh in 2011. Power station exhausts are emitted through a 150 m (492 ft) tall chimney, one of the country’s tallest man-made structures.